The Hackney Society at 50 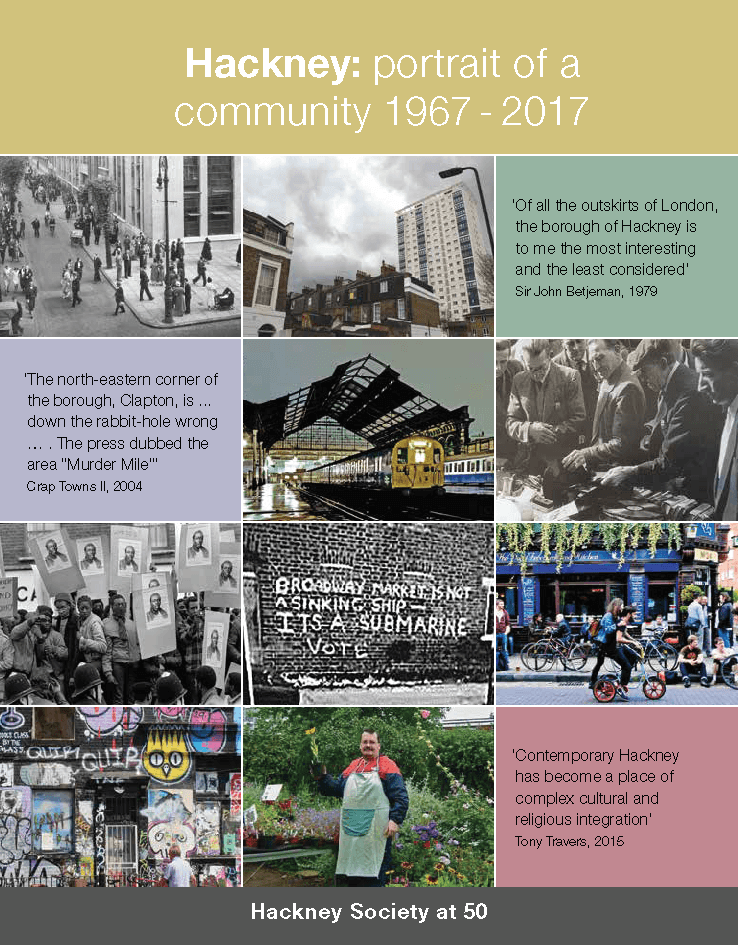 Join us as we mark 50 years of The Hackney Society with a panel discussion from Julia Lafferty, Ian Rathbone, Alan Rossiter, and Laurie Elks, four of the contributors to Hackney: portrait of a community 1967-2017.

Hackney is one of the London boroughs that has changed most radically over the past fifty years. In 1967 it was one of the poorest areas of the capital, the home of a combination of light industry and much inadequate housing, with a largely working-class population. But Hackney could also boast some of the fine historic buildings of London, which is why Sir John Betjeman was persuaded to become the Society’s first President.

Today, the picture is very different. Hackney is regarded as cool, hip, the smart place to live and work, with easy access to the City. It is also home to many cultures from every part of the world. Some of its historic buildings and open spaces have survived, though not all, despite campaigns to try to save them. And the picture is complex. As one longtime Hackney resident has pointed out, in some ways the place is very much the same as it was fifty years ago, but for some, it remains an area of deprivation and violence.

Hackney: portrait of a community 1967-2017 features fifty specially commissioned pieces from a whole range of authors, who have drawn on their own experiences and expertise. The subjects covered range from social issues such as housing, the question of ‘regeneration’ and education, to the cultural, with the demise of dog racing, the opening of Centerprise and the flourishing of the theatre as exemplified by the Arcola and the Hackney Empire. The darker side is not glossed over, with a piece on the death of Colin Roach by Duncan Campbell, and the riots of 2011.

Julia Lafferty was a founder member of the campaign to save Sutton House in the 1980s. She is a trustee of the Hackney Society, serves on the Clapton Conservation Area Advisory Committee and has written articles for Hackney Society publications and for Hackney History. She acts as secretary to the Friends of Clapton Cinematograph Theatre and as an advisor on heritage issues to Clapton Arts Trust.

Ian Rathbone has worked all his life as a journalist, writer and designer and has received a number of national awards for campaigns, including one which significantly reduced street robbery in Hackney, and for his role in the disturbances of 2011. He has been a councillor for Lea Bridge Ward since 2002. Ian was born in Hackney and traces his family in the borough back to at least 1862.

Alan Rossiter is an artist, designer and public art consultant who has worked in Hackney since 1972 and lived in the borough from 1977. Alan was organiser of the Hackney Marsh Fun Festival and Fireshow, first artistic director of Chats Palace and associate director of Free Form Arts Trust.

Laurie Elks has lived in Hackney since 1972. He is a trustee of the Hackney Society and Hackney Historic Buildings Trust and a custodian of St Augustine’s Tower, the borough’s oldest building. He has campaigned for for the protection of the Lea Valley since the 1970s. He was previously a lawyer working on the investigations of miscarriages of justice.